People often debate this ancillary medical question: Which is worse, breaking an ankle or spraining an ankle? For all of that, what’s the difference between the two?

To answer those questions, let’s review all the possibilities. From a medical point of view, the question “which is the worst” of two non-lethal injuries is the same as what injury limits functioning the most, which one hurts the most or which is the most disfiguring.

Furthermore, there are three types of medical designations for routine injuries of this type: Sprains, breaks, and strains. Here’s the difference between these three:

A strain is caused by sudden over-stretching, twisting or of a muscle or a tendon or both. A tendon is a fibrous band of tissue that connects a muscle to a bone.

Strains can be severe, causing intense pain, muscle spasms, inflammation, loss of strength and cramping. A strain can be either mild or severe with the worse cases involving tearing of either muscles or tendons, including tendons that detach from muscles or bones.

Strains commonly occur at the back of the hamstring muscle, which runs along the back of your thighs. A hamstring can be pulled by overstretching the leg, which might occur in running and then either accelerating quickly or jumping suddenly. Hamstrings are common to any sport where running is required.

Healing from a strained muscle or tendon

Healing from a strain can take up to six months or more. One of the problems with these types of injuries is that fully healing takes so long that re-injury is common. 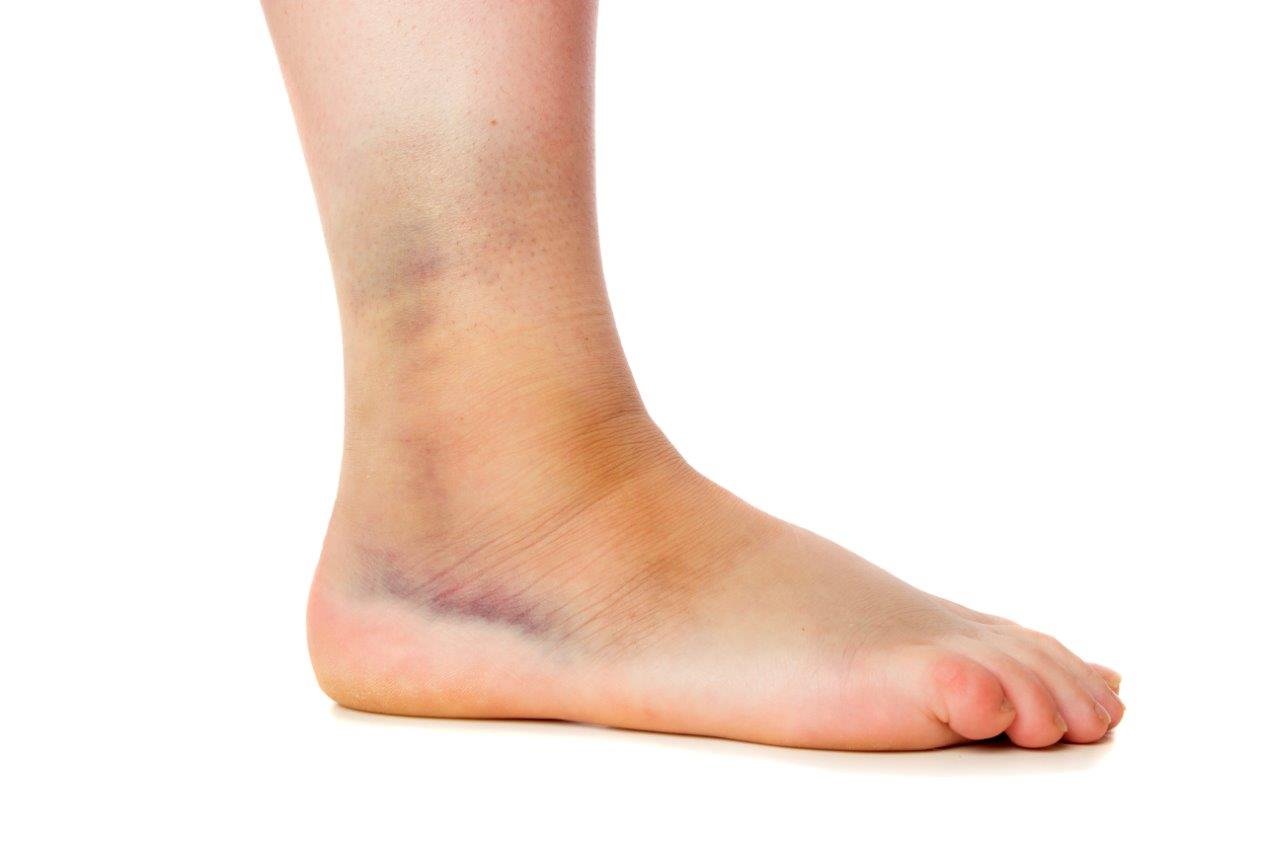 A sprain, technically, is an overstretching of ligaments, which connect two bones, often wrapping around two bones of a joint to hold the joint into place. As such, injuries to knees, ankles and other joints frequently are sprains, rather than strains.

A sprain can be very painful, causing the area to swell up and turn various shades of blue, black and yellow or red. The intensity of a sprain depends on the severity of the injury, which could involve rupturing a ligament or having it separate from the bone it is expected to support. Severe sprains might include dislocation of the joint.

A broken bone can be very painful, but it is not always so. While a clear break is certainly painful, fractures can be very slight (often called a hairline fracture) and relatively small. There is usually some pain involved with a slight fracture, but the area could also experience numbness without much pain.

The severity of an injury is dependent on related factors. How much does it hurt? How much does treatment cost? How long does it take to heal? Is the injury likely to reoccur?

By several of these measurements sprains and strains could be said to be worse than breaks or fractures, if there is no surgery involved. Treatment of the fracture might be more expensive initially if a cast is required for stabilization, but severe sprains are also treated with stabilizing casts.

Here’s the breakdown. As far as pain, it is hard to conclude either of these is more painful than the other. A broken bone can be extremely painful at first, but a hamstring pull is often just as painful. A badly sprained ankle can also be painful. We have to consider this a virtual three-way tie.

The long and the short comes down to the time it takes to heal and the risk of re-injury. In this case, a sprain can take even longer to heal than a fracture or a broken bone and is far more likely to reoccur. A healed bone is almost as strong as one that never broke in the first place, whereas the soft tissue damage from a sprain or strain can persist for a long time, increasing the chances of re-injury.

How can you tell the difference?

Modern medical imaging (an X-ray or a CT Scan) is used to diagnose a sprain, strain or fracture, but you can make an educated guess when the injury occurs. Sprains and strains hurt primarily in an area of soft tissue, while bone pain (and swelling) occurs where the bone is the primary structure. Secondly, a broken bone or a fracture often results in numbness, where a sprain and/or strain do not.

Any sprain, strain, fracture or break should be seen by a doctor as soon as possible to prevent further injury. Let us help you return to an active lifestyle with minimum pain. Call FXRX Orthopaedics and Bracing in Phoenix, Az., at 480-449-FXRX.

END_OF_DOCUMENT_TOKEN_TO_BE_REPLACED

Dr. Dewanjee is one of the most reliable doctors I have worked with, I would recommend him to anyone I know.

"I have known Dr. Dewanjee for 3 years and am thankful for his surgical abilities. My first encounter was his operating on my broken hip followed by right and left knee replacements.

My successful surgeries have given me the ability to comfortably do what I love; swimming for an hour daily. I am able at 85 years old to live alone in my own home and take care of myself.

I would highly recommend Dr. Dewanjee because of his skill and compassion."

"During my Freshman year of college I dislocated my shoulder during a basketball game. After being referred to Dr. Sumit Dewanjee I wouldn't ask for a better doctor. He listens to his patients with depth that insures security. He performed surgery on my shoulder. During my visits to his office, Dr. Dewanjee and his staff were very customer oriented and organized. Within six months I was playing basketball again. I would definitely recommend Dr. Dewanjee."

"I would like to express my gratitude for the surgeries you performed on my knees. You did a wonderful job and thanks you now I can walk without pain. Prior to the surgery I was scared, and I am willing to share my positive experience with others to help them overcome any fears they might have of going through the surgery.

I sincerely appreciate everything you have done and wish you lasting success so that you may bring happiness to others!"

Abel Romero, Phoenix
Hilary Matheson
"In January I was involved in a horse riding accident which left me with several broken bones including a badly fractured clavicle.  As a Canadian I had heard horror stories about the American medical system; my experience, however, was wonderful.
Within 24 hours of the accident I had an appointment with an orthopedic specialist, Dr. Sumit Dewanjee.   His staff was professional, friendly and caring, making the whole process of being a Canadian in the American medical system as simple as possible. They dealt with all the paperwork which made the situation much easier for me.
Dr. Dewanjee is a very personable and skilled professional.  He laid out my options very clearly and recommended the surgery I ended up having. The surgery was very successful.
I was made to feel like a valued patient as Dr Dewanjee carefully and fully answered all my questions and concerns.  I would highly recommend Dr. Dewanjee and his entire staff to anyone wanting excellent care and a successful surgical experience."
Monica Garcia