One of the most common types of knee injuries is the result of a ruptured anterior cruciate ligament (ACL). The annual incidences in the U.S., involving ACL injuries, ranges from 100,000 to 200,000 people each year. An ACL injury occurs when at least one of the ligaments in the knee is torn. This ligament is what joins the upper leg bone to the lower leg bone, and it stabilizes the knee. The type of injury to the ACL can range from a small tear, the ligament completely tearing, or part of the bone and ligament completely separating from the bone. 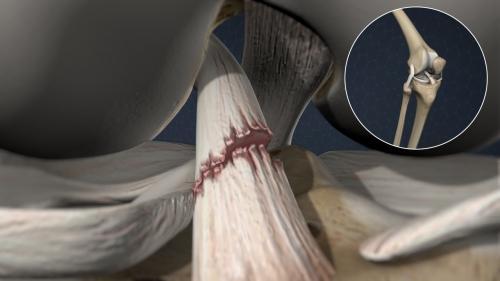 If an injured ACL goes untreated, it has less ability to control the movement of the knee, and can cause the bones to rub against each other. This causes chronic ACL deficiency, and the abnormal movement in the bones can damage the cartilage on the end of the bones, which leads to osteoarthritis. Injuries occur to the ACL when the joint is twisted, bent backwards, or bent to the side. The chances of a more severe injury to the ACL can occur if one or more of the movements happen at the same time.

Because conservative treatments of ACL injuries tend to be unsatisfactory, reconstructive surgery is the most commonly used treatments for younger people and for those who wish to maintain an active lifestyle. For those who are not extremely active in sports, it may be unnecessary to undergo the procedure. The main goal of ACL reconstruction is to restore the stability of the knee and its normal functioning following the procedure.

Traditional ACL reconstruction focused mainly on the non-anatomical single bundle reconstruction, which only provides anterior stability to the flexibility of the knee. 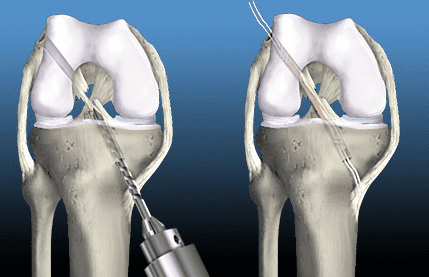 as well as the potential development of osteoarthritis.

Considered to be the standard technique in restoring anterior instability, single bundle ACL reconstruction only addressed the anteromedial bundle. This resulted in 10 to 30 percent of the patients complaining of feeling rotational instability. Studies have shown that single bundle reconstruction is able to restore the anterior-posterior stability, but it will not restore its normal rotational kinematics.

The double bundle reconstruction technique is also more demanding technically, and requires longer operation times with a more extensive loss of bone, which can result in additional surgeries being more difficult.

Although recent studies show this type of reconstructive surgery to provide better results with the pivot-shift test and anterior stability, some have failed to show the comparative advantages with clinical outcomes. Even though the double reconstruction is theoretically more beneficial over the single bundled reconstruction, it is not recommended for all ACL injuries.

Other studies also indicate that the central anatomical single bundle ACL reconstruction is superior compared to conventional non-anatomical single bundle reconstruction with restoring rotational knee laxity and normal anterior. There is debate with this procedure concerning the fact of anatomical femoral tunnel placement being achieved with the transtibial tunnel drilling technique. Research has shown that despite technical modifications, the standard transtibial technique used in ACL reconstruction is not able to restore the ACL’s anatomic femoral origin.

In order to address problems associated with the vertical femoral tunnel, many surgeons support independent drilling by an anteromedial portal. This is to position the femoral tunnel to the anatomical position, rather than using the conventional transtibial drilling technique. Reports indicate exceptional clinical results with anatomical ACL reconstruction by using three portals instead of the commonly used two portals. Some studies have indicated that anteromedial portal drilling can better locate the femoral tunnel to the anatomical position compared to transtibial drilling.

Even though there are no explicit conclusions as to whether or not double bundle ACL reconstruction is able to provide improved clinical results compared to the single bundle technique, the primary trend with ACL reconstruction for the past 10 years has focused on anatomic reconstruction with both the double bundle and single bundle technique. With the variety of treatment options that are available, selecting the best combination of treatments should be individualized based on the condition of the patient and experience of the surgeon.