A meniscal injury is a frequent source of functional impairment and pain in the knee. The menisci (pleural for meniscus) are situated between the tibia and the femur, and these wedge shaped structures are positioned in the lateral and medial condyles and are connected with a transverse ligament. The menisci plays a vital role in the knee and has many functions, such as providing protection during weight distribution, joint stabilization, articular cartilage nutrition, and lubrication to the joint.

A meniscal tear is most commonly classified into a vertical longitudinal, circumferential, oblique, complex, radial or transverse, and horizontal cleavage tear. Among these classifications, a radial tear in the posteromedial compartment is the most frequently seen tear, and a vertical longitudinal tear is most often associated with an acute ACL injury.

The majority of meniscal tears are unable to heal spontaneously. Some tears that are able to heal naturally include short vertical longitudinal tears, shallow tears, and partial tears. The vascularity, location, and tear pattern are important factors when determining the type of treatment that is required. 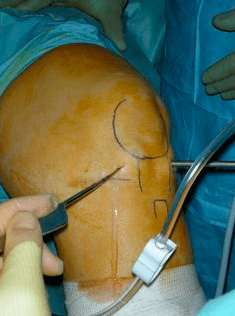 study with 213 patients that received this treatment, only 68% reported good or excellent outcomes, while 38% reported no post-operative symptoms.

In another study with 26 patients, 54% experienced satisfactory results 7 years following the procedure, and 20 patients experienced a limited range of motion. The results from these studies would indicate meniscectomy is not harmless. In order to preserve as much of the meniscus as possible, a partial meniscectomy may be performed when a repair may not be possible.

As surgical techniques and equipment continue to advance, arthroscopic menisectomy has been able to improve many long-term outcomes by causing less damage to the meniscus.

With symptomatic meniscus injuries, a partial meniscectomy is often preferred because the biomechanical functioning of the knee is better preserved, and with partial removal a quicker rehabilitation can begin, along with a faster recovery of functioning. Reports on post-operative satisfaction was noticeably higher at 90%, compared to 68% with total menisectomy. Based on clinical and biomechanical evidence, these results indicate that a partial meniscectomy produces better results.

The main goals of a meniscectomy are to remove any torn fragments that have become lodged between the femur and tibia throughout joint movements, prevent any recurrence with repairs to the inner portions of the meniscus that are torn, stabilize the joint, and to avoid any further damage from occurring.

As with any surgical procedure there can be intraoperative complications with a meniscectomy.

These are unusual, but postoperative complications can be:

Generally, rehabilitation has progressive steps with range of motion exercises and strengthening exercises. In most cases, a program will take around six weeks, and before a patient is discharged, they are instructed on ways to manage swelling and pain.

Although there has always been controversy regarding the clinical efficacy of different procedures with a meniscectomy, the general consensus is that treatments need to be performed with focus on preservation of the meniscal functioning. As studies have shown, degenerative changes following a meniscectomy are able to be delayed or prevented by preserving as much normal tissue as possible, with a minimum amount of resection to the meniscus.

For the top knee surgeon in the greater Phoenix and Scottsdale area, call (480) 449-3979 today. Dr. Dewanjee has won the Patients Choice Award 5 years in a row and has helped hundreds of patients achieve pain relief with meniscal surgery.